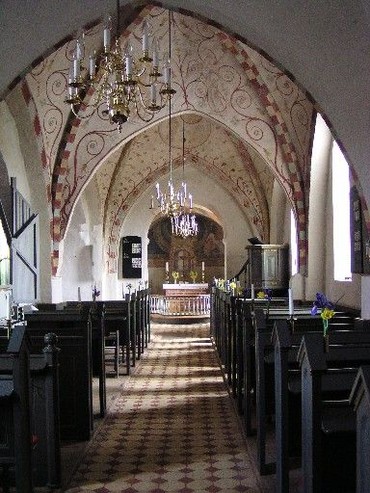 The church was built in the twelfth century (before 1150). The oldest parts are: the apse, the chancel, and the eastern part only of the nave. During the Middle Ages the nave was enlarged to the west, and the tower added, probably about 1500.

The former entrance was to the south. To the north there were originally two side chapels – today’s side nave.

The church is especially famous for its mural paintings. The oldest is the painting in the apse from about 1150 / 1175. The colours are typically Romanesque.

The medallions outside the chancel are quite renowned; they were painted in the late thirteen hundreds and depict scenes from Genesis 2 (the Story of the Creation).

One painting in particular is worth noticing: the one of a man eating fruit while seated in a tree. On his left side you see the elegant unicorn, on his right a terrible dragon – both awaiting the man. A dark and a white animal are eating the roots of the tree (night and day).

In the collection of medieval legends,” Legenda Aurea “, the story of this man can be studied. Doing nothing but enjoying the fruits, he should have realized the vanity of life!

The unicorn is a symbol of innocence, and even of Jesus Christ.

If you stop up for a moment, the meaning of the rest of the pictures will come of itself.